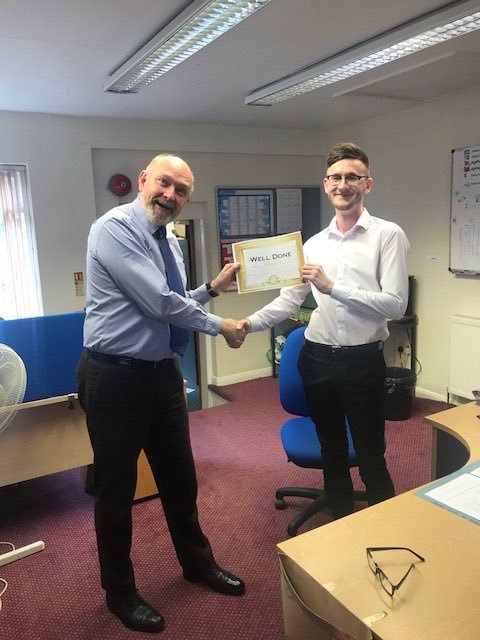 We spoke with Tim Bartlett of Mason Baggott & Garton in June 2017, about the successful relationship they have developed with McArthur Dean Training and how their Trainees and Apprentices have developed. (See here for that article)

We recently caught up with Tim to see how things have progressed since then, and we are happy to report even more continued success:

“We have maintained a strong workforce, with most of our apprentices progressing into permanent roles, and this has been a large contributing factor in the growth of the business. Having quality staff means that we are not spending lots of resources on recruitment, which allows us to grow other areas of the business.”

This growth has resulted in Mason Baggott & Garton opening a new branch in Barton upon Humber and Travis Dean, who has now completed his Intermediate Apprenticeship in Business Administration, has been taken on permanently at this office. Travis completed his Apprenticeship in June 2018 and is now working as part of the conveyancing team.

Ryan Smith, who had only recently started his Apprenticeship in Business Administration when we met with Tim last year, has also successfully completed his programme and he too has been offered a permanent position on the conveyancing team.

Paige Stevens, having completed her Apprenticeship, has now moved into a permanent role, as have both Hayley Blackett and Lewis Cadman. Hayley is currently training to become a Legal Executive and Lewis’ role has become more IT based, working on and developing the company website.

In addition to this, Mason Baggott & Garton have also recently taken on another Apprentice under the Trainee Solicitor Scheme. “The apprentices really add to the energy of the firm” says Tim, who could not be happier with the success both he and the company, as well as the Apprentices themselves, have experienced so far.

Want to join the success story?

Contact the Business Development Team on 01482 210093
or email info@mcarthurdean.co.uk

Still working for you.

To all our apprentices, trainees, employers and stakeholders. We hope you are well and keeping safe in these most difficult times. We just wanted to remind you that McArthur Dean’s staff will continue to work hard from home to help and support you as much as we possibly can and deliver the service you have become accustomed to.

We will, of course, update you on a regular basis. However, if you need further information please feel free to contact us on 01482 210093 or email us at info@mcarthurdean.co.uk and one of our staff will be happy to help. Please be assured that we are always there to help you…